Those who know me won't be surprised to hear I picked up an Apple Watch on the first day it came out.

I hadn't been as excited to own a gadget since the original iPhone back in 2007. Seeing Apple enter a new category is always an exciting time, and with the hype surrounding the launch of the Watch, this was no let-down.

Would the Apple Watch be "the most personal device yet"? Would the Apple Watch change my life in any significant ways? Apple's promotion of the device certainly suggested it would, but it seemed too early to confirm or deny these suggestions after a few weeks of owning the product.

Exactly one year in, I feel I've given the Watch enough time to form a solid judgement on the device and the platform as it stands today.

It seems fashionable to bash the Apple Watch right now, so let's start with something positive – what I love about the device.

The bands for Apple Watch are designed and made with extreme care and attention to detail. They make many other watch bands (otherwise known as "straps") look like junk.

It's not just the fancy Milanese Loop or Steel Link Bracelet that are beautifully designed, though. The Sport Bands are actually my favourite – they're the most comfortable by far, they're playfully coloured, and they're refreshingly simple compared to almost every other watch strap I've ever seen.

Make it as simple as possible, but not simpler.

Every first-party band epitomises Apple's design ethos of simplification. The Sport Band is ingenious in its ability to keep securely fastened to your wrist without needing an extra buckle or clip. The fastening mechanism took a little getting used to in the first week of owning it, but once mastered, it's easy to do with your eyes shut. 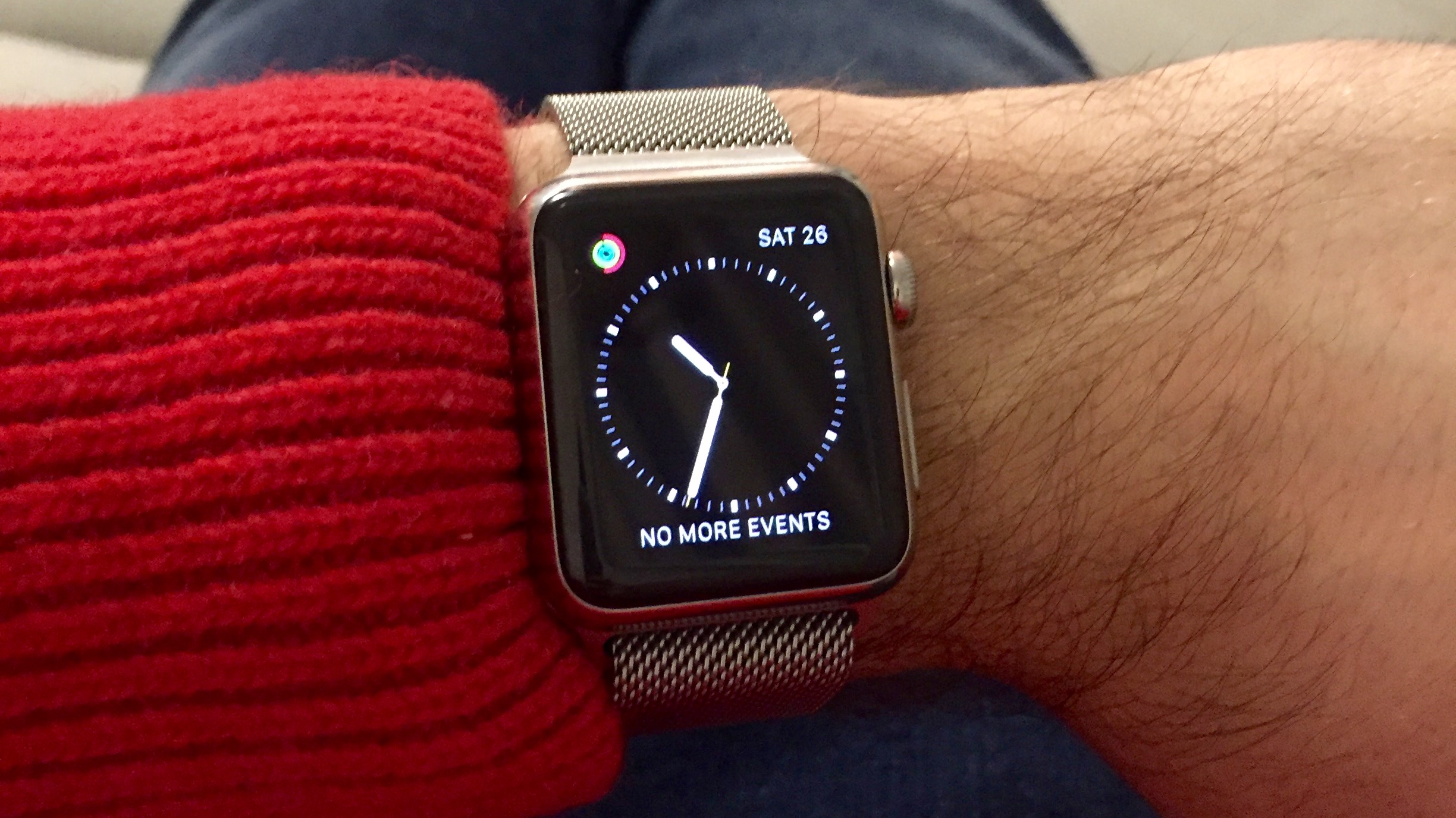 I was given the Milanese Loop for Christmas (Bands make a great present, and extra revenue stream for Apple), and so had a reason to change my band. The Milanese Loop is beautiful and great for wearing on smarter occasions.

Until receiving the Milanese Loop, I never had a reason to switch out the Sport Band, so I didn't appreciate a big chunk of Apple's pitch from the start – switching bands is easy and, dare I say it, fun. Again, the simplicity is ingenious. No tools required, just a button to push and slide out the band.

What's great is that with every band it feels like you're refreshing the whole Watch. One day it's a playful gadget on your wrist. Next it's a smart and sophisticated (albeit, electronic) timepiece.

No gadget has impacted my day-to-day exercise regime like the Apple Watch. I won't profess to be an athlete, not by a long shot, but the Apple Watch has profoundly changed my attitude towards fitness.

The Fitness aspects of the Watch are the single biggest motivator for me to keep wearing the Watch. Trying to work towards a monthly "Move" goal means putting the Watch on is one of the first things I do every morning.

I've previously used a FitBit for tracking my fitness activity throughout the day. I've also attempted to connect bluetooth devices to my iPhone in the past. Throughout all my experiences of trying to get devices to play nicely with each other over Bluetooth, I've never had the success I hoped for.

Having had the Apple Watch on my wrist for a year, I am thoroughly impressed by perhaps the least obvious aspect of it – it just works.

"But of course it should just work, that's what you paid for!" I hear you cry. Yes, this is what the consumer in me expects from a company that built the two devices, and that controls every element of the hardware, the software, and the services they connect with.

But the product maker in me is all too familiar with the challenges of building things that "just work". There's a multitude of complex technicalities under-the-hood to get the Watch to talk to the iPhone, to get Notifications displaying right, to get the thing charging, and to be secure enough to make payments with.

Day-to-day, though, I just put on my Apple Watch, and it sits in the background until I need it. I often forget I have the Watch on – it disappears until it's required. That's pretty magical for a piece of technology.

It's a two-handed device

Confession: I have used my nose to press buttons on my Watch when my other hand isn't free. For example, in the morning when I'm brushing my teeth and my alarm is going off on my phone, it's a quick fix to push the Watch on my face and shut the noise off.

A less embarrassing situation is simply on my walk to work – I carry a bag in one hand. If I want to use the Watch as a remote for anything (like switching to the next track of music) then it's actually really difficult. When carrying a bag in one hand, it's almost always easier to click on my headphones – an easy one-handed operation.

I don't want it to replace my iPhone

I was recently walking along the South Bank in London. It was a beautifully sunny day, and I had my music playing in my headphones – I was listening to one of my favourite songs, playing from Apple Music on my iPhone.

Then a phone call came in, and seeing as I had my iPhone headphones in, I would thought I'd answer it through them rather than get my iPhone out of my pocket. I looked at my Watch to see who was calling and hit "Answer" assuming it would pause my music and I'd be able to talk through my iPhone headphones.

But no. Instead, my caller was talking at me and her voice was echoing out the Apple Watch's speaker, while I was still listening to my music. What?!

This is just one of many examples where the Apple Watch seems to be competing with my iPhone for attention. Perhaps there is a setting to change this specific preference, but overall I would much rather have the Watch act more like a remote control for the functions of my phone.

I don't want my Watch to make any sounds. I don't really ever find myself wanting to talk into my Watch. And, for the love of God, I have no desire for the next generation Apple Watch to acquire a camera.

It's pretty safe to assume the Apple Watch is going to get an update this year. Will the next Watch have faster processors, a thinner case, or rethink the app paradigm? I don't know, but here are my wishes based on my usage over the last year. 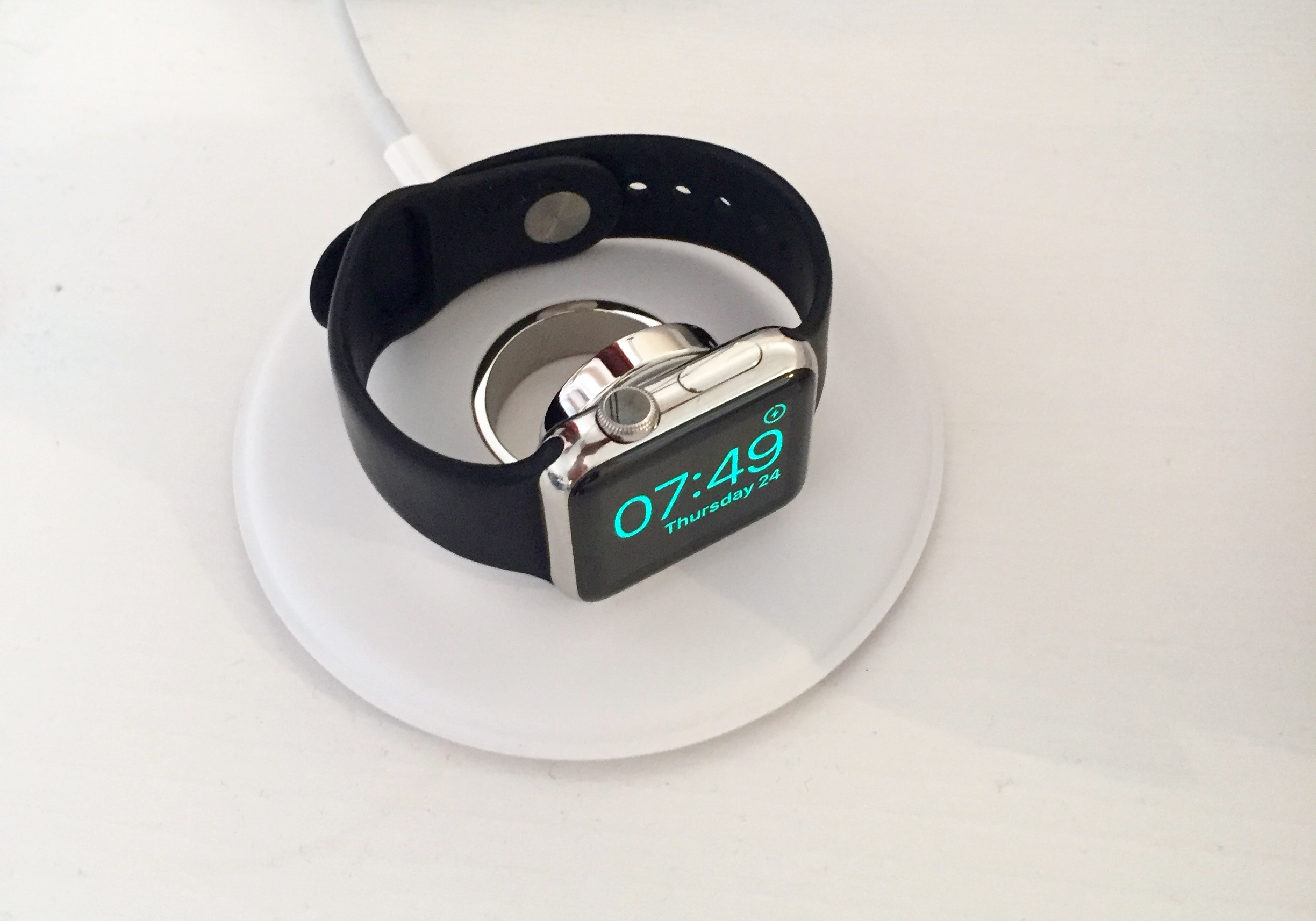 Before Apple unveiled the Watch, I was hoping for some magic. I was hoping there'd be some ingenious way the Watch would need to charge only rarely – either through some form of kinetic charging, or by using a less energy-hungry display technology. Alas, the Watch is not that different to its iPhone sibling in its charging needs – just on a smaller scale.

I hear the 42mm Watch has significantly better battery life than the 38mm model, but it seems unfeasible that either model would go two full days without charging.

In normal usage, the Watch can go a full day easily. But if I ever forget to charge it overnight, it's guaranteed to not make it through the following day. This is generally a bigger issue for me than when I forget to charge my iPhone for a few reasons:

I would love to see Apple focus on getting battery life over the two day mark. The dream is that Apple can move further away from iPhone-like battery life, and get towards traditional watch battery life.

I know some may be brave enough to go swimming with their Apple Watch, but I am not one of them.

Until Apple explicitly says it's meant for swimming, I'm not going to take my Apple Watch anywhere near a swimming pool, let alone the sea.

I'd love to track swimming as a fitness activity – it'd likely encourage me to go swimming more often. I'd also love to feel more confident about accidentally covering my Watch in water when I run my hands under a tap.

It feels we're nearly there, but I would assume Apple's decision on the lack of waterproof status for version one of the device lies primarily in expectation-setting. They've now had over a year to collect customer feedback, along with many thousands of water drenched Apple Watches through the Genius Bar to make a call on this decision for the next version of the device.

A rethink of apps on Apple Watch

While writing this review, I tried to find a shot of the Apple Watch home screen (above) on the Apple Watch marketing site. I couldn't find it anywhere. I think that's a sign of what's to come.

I never go to the Apple Watch home screen. One of the two hardware buttons on the device has almost no use to me. Why? I don't think it comes down to slowness, or a lack of processing firepower in the hardware. I believe it comes down to something very simple – I never want to proactively perform a task on my Watch when the same app is installed on my iPhone – a device with all the power I need, with a larger display, and that I can use with one hand.

Third party interfaces are complex on the Watch – there are Glances, Complications, Notifications, and full-blown applications. I often forget which is which, and I am willing to bet the average consumer has no idea what the difference between them all is.

Apple made the best guesses they could as to how the world would interact with the Apple Watch. But it's clear that third-party apps in their current form are broken for almost everyone.

Apple needs to make some significant changes to apps, and thankfully, unlike with a traditional timepiece, because it's all software, they can improve the Watch experience for every customer over night.

Overall, I'm a happy customer of the Apple Watch, but I struggle to wholeheartedly recommend it to my friends. Apple has made a truly beautiful device with a remarkably deep level of care in every element of the hardware design. But it's clear Apple has missed the mark on a few fundamental areas of the software and platform in the first version.

There's a huge opportunity to make future generations of the device incredible now that so many people are using it every day – I really believe the future is bright for the Apple Watch.

Now I must dash – I've got to complete my Move goal for the day.

Talking on the Kobestarr Digital Podcast

When is it good enough to ship?

Every company sets their bar at a different height. Everyone wants to move fast (and break as few things…